At His Own Wake, Celebrating Life and the Gift of Death

Tormented by an incurable disease, John Shields knew that dying openly and without fear could be his legacy, if his doctor, friends and family helped him. By CATHERINE PORTER Photographs and video by LESLYE DAVIS MAY 25, 2017 VICTORIA, British Columbia — Two days before he was scheduled to die, John Shields roused in his hospice […]

Tormented by an incurable disease, John Shields knew that dying openly and without fear could be his legacy, if his doctor, friends and family helped him.

Photographs and video by LESLYE DAVIS

VICTORIA, British Columbia — Two days before he was scheduled to die, John Shields roused in his hospice bed with an unusual idea. He wanted to organize an Irish wake for himself. It would be old-fashioned with music and booze, except for one notable detail — he would be present.

The party should take up a big section of Swiss Chalet, a family-style chain restaurant on the road out of town. Mr. Shields wanted his last supper to be one he so often enjoyed on Friday nights when he was a young Catholic priest — rotisserie chicken legs with gravy. 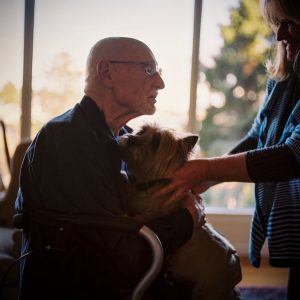 Then, his family would take him home and he would die there in the morning, preferably in the garden. It was his favorite spot, rocky and wild. Flowering native shrubs pressed in from all sides and a stone Buddha and birdbath peeked out from among the ferns and boulders. Before he got sick, Mr. Shields liked to sit in his old Adirondack chair and watch the bald eagles train their juveniles to soar overhead. He meditated there twice a day, among the towering Douglas firs.

“Someone once asked me how did I get to become unique,” he said that afternoon in his hospice bed. “I recommend meditation as a starting place — bringing your consciousness to bear.”

Mr. Shields intended to die swiftly and peacefully by lethal injection, administered by his doctor. Last June, the Canadian government legalized what it termed “medical assistance in dying” for competent adult patients who are near death and suffering intolerably from irremediable illnesses. When his doctor, Stefanie Green, informed him that he qualified, Mr. Shields felt the first hope since a doctor told him more than a year before that he had a rare and incurable disease called amyloidosis, which caused proteins to build up in his heart and painfully damage the nerves in his arms and legs.

Having control over the terms of his death made him feel empowered over the disease rather than crippled by it, a common response among Dr. Green’s patients. Mr. Shields believed that dying openly and without fear could be his most meaningful legacy — which was saying something. The man had packed five lifetimes of service into one: He had been a civil rights activist, a social worker for children, the head of British Columbia’s biggest union and, most recently, the savior of a floundering land trust that included 7,191 acres of protected wilderness and historic properties.

His newly developed plan for how he would spend his last moments, though, worried his wife, Robin June Hood. Her husband had not left his bed once since he arrived at the hospice on a stretcher, 17 days earlier. His 78-year-old body had thinned; his voice dimmed. He lasted only 15 minutes in conversation before his eyes fluttered closed. Just leaving the room would exhaust him. She knew he could not make it to the restaurant, and there was no way she could tend to his needs at home, even for one night — especially his last.

Happily, Dr. Green had become adept at brokering delicate family discussions over the past year. She had presided over 35 deaths since the law passed, each intimately different from the next. One man got dressed in his amateur clown costume, complete with wig and red nose, and died telling her jokes. He had insisted on being alone in the room with her, but most of her patients died surrounded by loved ones. Many were too sick to devise elaborate rituals, but others had chosen the location, attendees, readings and music as if planning a wedding. Dr. Green called them something she picked up at a conference on euthanasia in the Netherlands: “choreographed deaths.”
She arrived at Mr. Shields’s hospice room that day to finalize the plans. The couple held hands as she helped them stitch a compromise. On March 23, the last night of Mr. Shields’s life, they would host a party in the hospice solarium with Swiss Chalet takeout for all. The next morning, he would die in his hospice room. Then, his wife and stepdaughter would take his body home and lay it out in his beloved garden for two days.

The plan, Mr. Shields said that afternoon, was “absolutely terrific.”